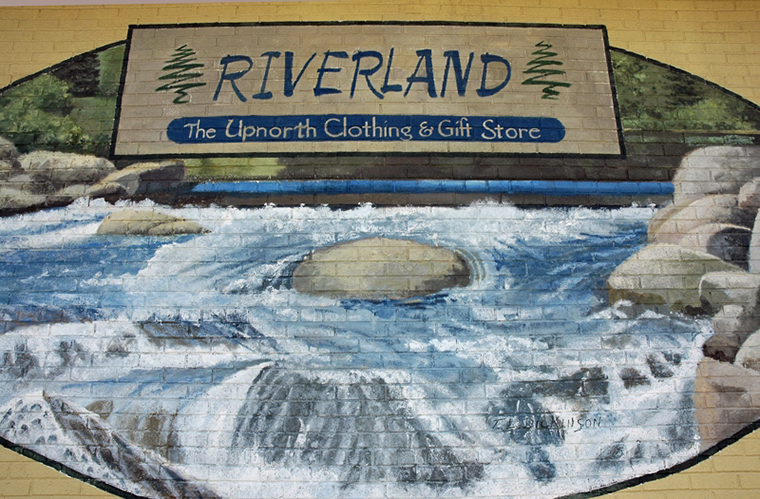 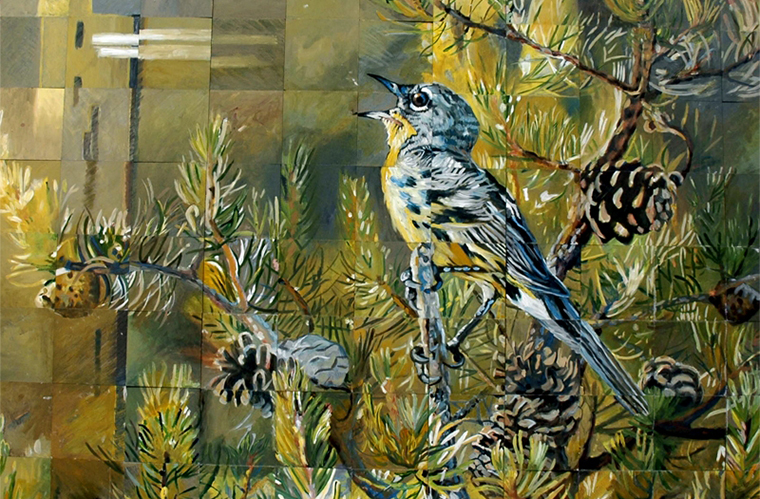 Dead Bear Brewery, two murals of the Main Branch of the AuSable River and one mural of historic Hanson Hills Recreation area, painted by Dean Worden

U.S.Post Office, mural painted as part of “The New Deal” used to get artists back to work during The Great Depression

The Bicycle Shop (now closed), This mural is a knock-off of Alphonse Mucha whose delicately sensuous style epitomizes the urbane grace of French Art Nouveau. Mucha was a Czeck, born in 1890 next to the local jail in the remote Moravian town of Ivancice, who died after being questioned by the Gestapo in Prague in 1939. This particular work was done in 1897 known as “Bieres De La Meuse”. Painted by Terry Dickinson.

Miscellaneous information from artist Terry Dickinson: The subject matter of the mural is typically selected by the client. He gives them a pencil sketch of the mural, and depending on the subject matter, may draw the mural on a grid system, usually a six or twelve inch grid. Depending on proportions, some of the mural is painted freehand. Aluminum panels are painted inside and then attached to the outside wall. Larger murals take more than one panel. Murals painted on aluminum rather than the building itself tend to last longer.

Dickinson also has a public art mural presence in Frankenmuth, Petoskey, Harbor Springs, Ludington, Flint, Traverse City,  Roscommon, Houghton Lake and Gaylord along with many private homes across the state of Michigan. Dickinson has exhibited in several international juried shows and was awarded recognition in the 2003 Northeast Michigan Artists’ Juried Exhibition at the Jesse Besser Museum in Alpena, Michigan; 2005 Gaylord Area Council for the Arts Exhibition; 2010  Best of Show, Sketching, and Best of show, Portraits,  Artcenter Traverse City.